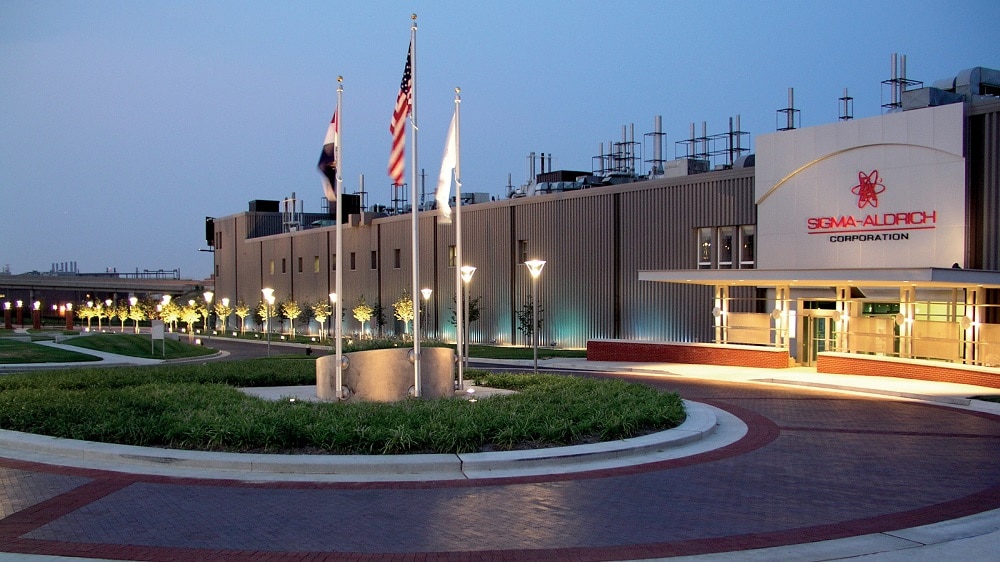 Sigma-Aldrich Corporation is a developer, manufacturer, and distributor of a wide range of biochemicals, organic chemicals, chromatography products, and diagnostic reagents. The company is the world’s leading seller of chemicals to research laboratories, pharmaceutical companies, and hospitals, with a product line that includes 85,000 substances sold under five well-known chemical brands: Sigma, Aldrich, Fluka, Supelco, and Riedel-de Haën. Sigma-Aldrich has more than 150,000 customers in more than 160 countries; the majority of its sales to these customers are on the small side, averaging about $300. About 55 percent of sales are generated outside the United States. The company maintains manufacturing facilities in Missouri, Pennsylvania, Texas, Wisconsin, Germany, Israel, Switzerland, and the United Kingdom. Approximately 46 percent of sales are derived from company-manufactured products.

Sigma-Aldrich Corporation is the result of a 1975 merger between two specialty chemical companies, one that manufactured biochemicals (Sigma Chemical Company) and another that manufactured organic chemicals (Aldrich Chemical Company). While offering divergent products, both companies regarded high-quality products and customer service a priority. The merger, therefore, represented a convergence of business strategy as well as the creation of a diversified product line that ranked Sigma-Aldrich at the top of the specialty chemical industry. In particular, because of the scientific community’s involvement in the growing field of biomedical research, Sigma-Aldrich’s product catalog became standard issue in pharmaceutical laboratories around the world.

Sigma Chemical Company was started in 1945 in St. Louis. At a time when sugar was scarce Dan Broida, a biochemist, began a storefront business to manufacture saccharin. The company later went on to produce biochemicals and diagnostic products. Sigma’s customers ranged from hospitals to university laboratories. Scientific fields concerned with the study of life sciences as well as disease diagnostics use biochemicals as the basic substances to develop pharmaceuticals and diagnostic tests.

Aldrich Chemical Company, founded by the Harvard-educated chemist Dr. Alfred R. Bader, began manufacturing organic chemicals in a Milwaukee garage six years after Broida established Sigma. Aldrich’s first products were those chemicals not offered by Eastman Kodak, a leader in the chemical industry. Bader soon decided that his company could engage in direct competition with larger companies, and he began offering a broad line of organics sold to research laboratories of pharmaceutical companies. The company did exceedingly well and its customer list soon included the likes of Abbott Laboratories and Ciba-Geigy.

The 1975 merger between the two companies matched skill for skill and talent for talent. Broida assumed the role of chairman and Bader took the position of company president. While the combined company interests still remained small compared to those of the larger industry firms, the business acumen of Sigma-Aldrich’s management went a long way in securing an impressive percentage of the specialty chemical research market. By 1979 the company laid claim to between 30 and 40 percent of the $100 million research market. Sales climbed to $68 million, representing an annual increase of 15 percent. Earnings jumped 24 percent to $9.2 million, causing Wall Street analysts to predict continued growth of 20 percent a year.

Sigma-Aldrich’s marketing success, achieved by neither a large sales force nor expensive advertising outlays, relied on the distribution of catalogs. In addition to advertising products available on a phone-order basis, the catalog offered detailed information about the physical properties of the marketed chemicals. The value of the catalog as a reference source as well as an advertising tool was evident, and it soon became a company trademark. Initially compiled by Bader in the early 1950s as a one-page, one-chemical listing, the catalog grew to include 40,000 chemicals by the late 1970s. Sigma-Aldrich’s small sales force distributed 300,000 free copies of the catalog in 1979.

The company’s reputation among chemists as a manufacturer of quality products matched a distribution network that ensured most orders would be filled in 24 hours. Interestingly enough, in the early years of Sigma-Aldrich’s business an average order amounted to less than $100. This indicated a customer profile of academicians or laboratory researchers experimenting with relatively small quantities of chemicals. Although this profile was altered somewhat in the ensuing years due to the increasing pressure to supply bulk commercial chemicals, Sigma-Aldrich fiercely defended its business as first and foremost a service to the research community.

In the 1980s the company’s growth matched the explosion in the U.S. biomedical research market. Despite such gains Sigma-Aldrich’s management, much to the chagrin of some industry analysts, refused to alter the strategy that laid the framework for previous company growth. Rather than set long-term goals or exploit the bulk chemical market as some observers suggested, Broida defended his company’s straightforward ‘opportunistic’ policy of keeping pace with state-of-the-art developments in the scientific fields of immunology, microbiology, and endocrinology. By supplying chemicals in small quantities to research centers, Sigma-Aldrich’s growth and profits corresponded to breakthrough research in the development of pharmaceuticals from recombinant DNA.

Wall Street analysts also criticized the company’s B-Line Systems, Inc. subsidiary, which had been inherited from the Sigma side of the company lineage. Manufacturing metal frameworks for industrial plants, the subsidiary was criticized for competing in the business of specialty chemicals on the one hand, and for contributing small profit margins on the other. Despite such criticism, however, the company’s lack of long-term debt, its sparkling earnings record, and its annual profit increase of 20 to 25 percent mitigated the seriousness of such complaints.

Upon Dan Broida’s death in 1981 several changes in policy and management affected the company structure. Tom Cori, a nine-year Sigma veteran, became company president. Common stock, formerly controlled by a 50 percent insiders interest, now became more widely held. In 1985, 2.2 million of the 8.68 million outstanding shares were sold for $129.5 million. Most of this stock had been held by relatives of Broida and the sale reduced their holdings to 1.3 million shares. This new figure represented approximately the same interest held by the Bader family.

Of the 2.2 million shares sold the company purchased 500,000. Apparently Bader had been opposed to the company purchase partially on the grounds that $13 million was borrowed to finance the transaction. Company indebtedness now totaled $32.4 million in short-term loans due in part to a $16 million expansion program started in 1980. Some five million shares, on the other hand, were now estimated to be available for trade in the over-the-counter market. Price per share between July and September 1985 ranged from $60.50 to $71, well over the company’s $14 per share book value. A three-for-one stock split was soon in order.

By 1986 some 1.5 million company catalogs circulated yearly. Sigma-Aldrich’s orders continued to average less than $150 each; on the other hand company profits totaled $29 million on volume of $215 million. Although president of a company with such impressive achievements, Cori did not rest on his laurels. Limited governmental funds for scientific research as well as the effect of the strong dollar on overseas sales offered some cause for concern. To facilitate expansion by broadening Sigma-Aldrich’s product line, the company purchased Pathfinder Laboratories. The new subsidiary, costing $1.5 million in stock during 1984, manufactured radioactive chemicals. A much larger acquisition came in 1989 when Sigma-Aldrich purchased one of its main European competitors, Switzerland-based Fluka Chemie AG, from Ciba-Geigy and Hoffmann-La Roche. Fluka, maker of biochemicals and organic chemicals for the laboratory market, had annual sales of about $55 million.

In 1991 Sigma-Aldrich took a significant step toward filling more bulk orders through the establishment of a fine chemicals division, which was charged with large-scale manufacturing of chemicals for the pharmaceutical and biopharmaceutical industries. That same year, Bader retired from his position as chairman and was named chairman emeritus. Cori took on the additional title of chairman. Bader’s new role was short-lived, however, as in early 1992 he was voted off the board of directors and stripped of his chairman emeritus title. The reason for the board’s action was never made public, although it was speculated to involve either an allegation that Bader had made a bet against the company’s stock through a call option, a charge Bader denied, or the fact that Bader had failed to report his exercising of the option to the Securities and Exchange Commission in a timely manner, an action that Bader said had been ‘an honest mistake.’ In any event, Bader, who was held in high esteem by numerous Sigma-Aldrich customers on six continents, continued to be one of the largest holders of the company’s stock into the early 21st century, when he held about six percent.

While sales and earnings growth slowed in the early and mid-1990s to 15 percent or less per year, Sigma-Aldrich continued to expand aggressively through such internal growth initiatives as the adding of manufacturing and distribution capacity as well as through acquisitions. In May 1993 the company acquired Supelco, Inc. from Rohm and Haas Company for $54.7 million. Based in Bellefonte, Pennsylvania, Supelco was a worldwide supplier of chromatography products used to analyze and purify drugs and had annual sales of $48 million. In 1994 David R. Harvey was named president and chief operating officer, with Cori remaining chairman and CEO. In the area of plant expansion, Sigma-Aldrich by 1997 had three new manufacturing facilities up and running: the first in St. Louis specializing in industrial tissue culture products, the second in the United Kingdom for pharmaceutical intermediates, and the third in Israel for immunochemicals. Meantime, in 1996, the company was fined $480,000 by the federal government for illegally exporting toxic substances that could be used to make chemical weapons; Sigma-Aldrich said that it had ‘inadvertently violated’ U.S. export laws and that there was no evidence that the substances had actually been used to make such weapons.

Acquisitions returned to the fore in the late 1990s. In June 1997 the company purchased a 75 percent interest in Riedel-de Haën, a German maker of laboratory chemicals. In March 1999 Sigma-Aldrich purchased the remaining 25 percent. In December 1998 the company stepped up its presence in the biotechnology sector with the $39.5 million purchase of Texas-based Genosys Biotechnologies, Inc., one of the world’s leading suppliers of custom synthetic DNA products–essential components of gene research.

In spite of the company’s acquisition drive, growth slowed to a trickle by 1998, when sales increased by just six percent and net income barely edged ahead, increasing by only 0.1 percent. During 1999, a year in which the company was proceeding in a similar direction, significant changes took place at Sigma-Aldrich. In October, Harvey was promoted to president and CEO, with Cori remaining chairman. One month later, Harvey announced that the company would launch a major restructuring and would sell off its noncore B-Line Systems subsidiary. Through the restructuring, Sigma-Aldrich was reorganized into four main business units: laboratory products, which focused on chemicals used for research conducted in academia and industry and which accounted for about 55 percent of the company’s revenues; life sciences, which concentrated on specific areas of research, including molecular biology, immunochemistry, cell biology, and chromatography (20 percent of sales); fine chemicals, which was retooled to include both large-scale manufacturing of chemicals and custom manufacturing (15 percent of sales); and diagnostics, which focused on products used to help diagnose and treat diseases, with a particular emphasis on tests in the areas of coagulation and immunoassay (ten percent). Sigma-Aldrich also hoped to drive growth through e-commerce, having successfully launched an award-winning web site in September 1998 through which five percent of U.S. orders were being placed by the end of 1999. With the completion in May 2000 of the sale of B-Line Systems to Cooper Industries, Inc. for $425 million, Sigma-Aldrich could, for the first time in its history, plan for the future as a company with a single focus–supplying chemicals to the life science industries.